The Must-See Places in Europe That Will Make Your Tour Itinerary a Sales Hit!

Trying to put together a European group tour is no easy task when you’re not familiar with the continent. Europe is full of magnificent places; from North to South and East to West, the options are truly endless.

If you want to create a trip itinerary that will practically sell itself, then keep reading for the destinations you absolutely have to include.

Combine these destinations in a 2-week (or more) tour programme and show your clients the way to scratch so many places off their bucket list in just one trip!

London – the Capital of the World

England’s capital is one of the most visited cities in the world receiving over 20 million visitors annually.

With exquisite modern architecture, high-end shops, more than 230 theaters, 170 museums and art galleries, London has something for everyone.

Renowned landmarks like the Big Ben, London Bridge, Buckingham Palace, Westminster Abbey, the London Eye and St. Paul’s Cathedral are only just some of the opportunities available to turn the visit of the city into an unforgettable tour experience.

Considered by many the “capital of the world”, London is a city you definitely have to visit at least once in your life.

Paris – the City of Light 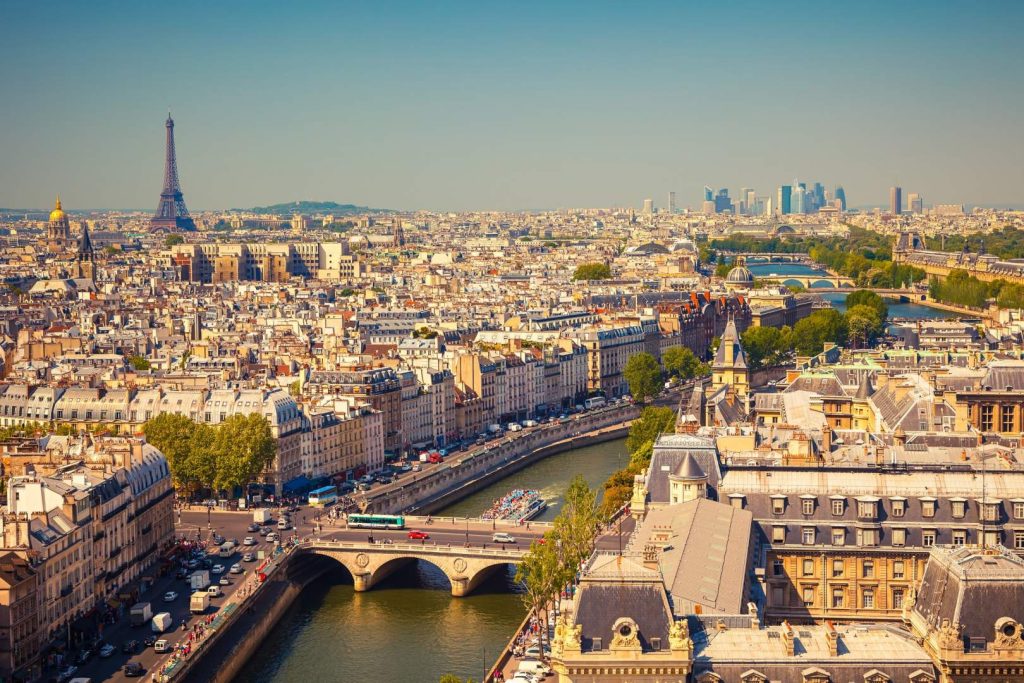 “If you are lucky enough to have lived in Paris as a young man, then wherever you go for the rest of your life it stays with you, for Paris is a moveable feast.” – Ernest Hemingway

“When good Americans die, they go to Paris.” – Oscar Wilde

Paris is the second most visited city in Europe after London.
A major center for education and ideas during the Age of Enlightenment, Paris is also known as “The City of Light”.

A visit to the Montmartre district is definitely not to be missed.
Primarily known for the Sacre-Coeur Basilica standing on top of the hill and its vibrant nightlife, Montmartre has been the set for several Hollywood movies such as 1951s “An American in Paris” starring Gene Kelly, the 2001 hit “Amelie” and Woody Allen’s “ Midnight in Paris” in 2011.

In the early 20th century, during the Belle Epoque, many artists had their studios or worked around Montmartre such as Pablo Picasso, Salvador Dali, Amedeo Modigliani, Vincent Van Gogh and many others.

Of course, a tour of Paris is not complete without visiting the city’s landmarks such as the Eiffel Tower, the Arc de Triomphe, the Champs-Elysees Avenue, the Notre Dame Cathedral and the Louvre Museum.

As Thomas Jefferson once put it..

“A walk about Paris will provide lessons in history, beauty, and in the point of life…”

Cannes – the city of Cinema 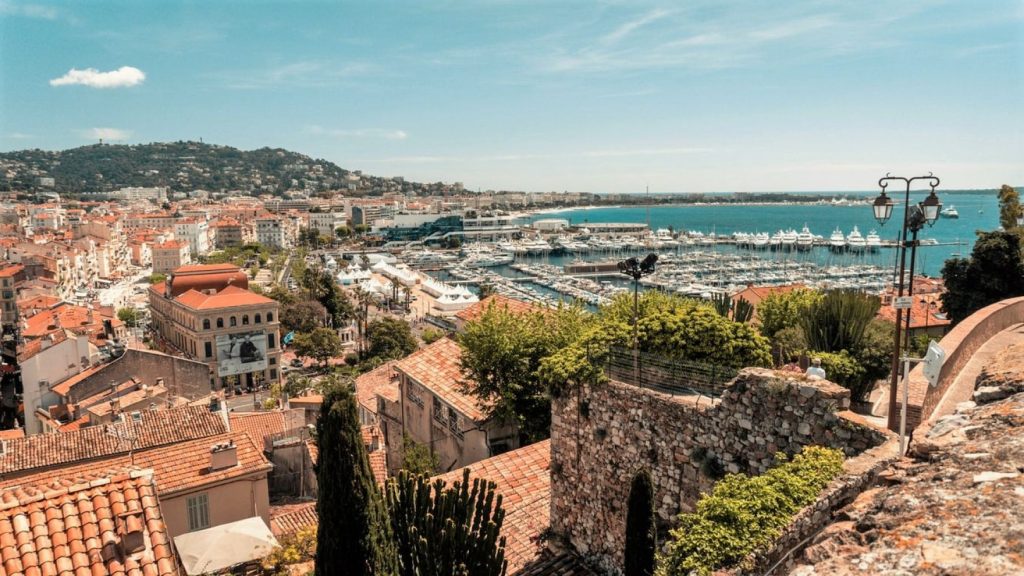 Cannes, an iconic city of the French Riviera, is a renowned holiday retreat for the rich and famous with luxury hotels and fine dining restaurants.

Every year, celebrities gather from all over the world to walk the red carpet of the homonymous Cannes Film Festival.
Walk through Le Suquet, the oldest neighborhood in Cannes dating back to Roman times and window-shop along La Croisette Boulevard filled with prestigious shops and luxury hotels.
You will quickly feel the authenticity and charm of this lovely Mediterranean town.

Interesting facts:
In 2013, the largest value diamond heist in France and one of the biggest in the world, took place in Cannes when one robber walked away from the Intercontinental Carlton Cannes hotel with 115 million USD worth in jewelry in just 60 seconds.

Ironically, the theft took place at the same hotel where Alfred Hitchcock shot much of the classic 1955 film “To Catch a Thief”.

During the filming of this movie, Grace Kelly was first introduced to the then-ruler of Monaco, Prince Rainier who would later become her husband and Grace the Princess of Monaco.

Nice – Capital of the Côte d’Azur 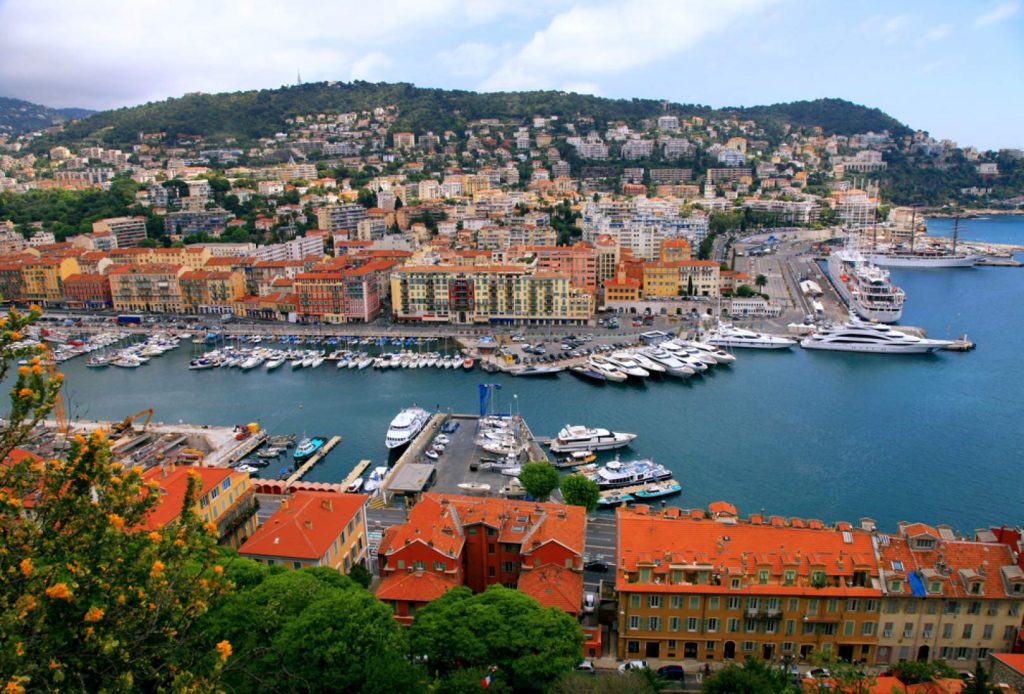 Considered as the center of the French Riviera, the city has an artistic flair which draws visitors from around the globe.

Wander through the cobblestone alleys of the old town and discover some of the most popular bistros and restaurants; marvel at the colorful Flower Market at Cours Saleya; stroll along the Promenade des Anglais and admire the Belle Epoque architecture.

Take a walk at the Old Port and head to the Castle Hill Park overlooking Nice old town for spectacular views of the city and the Bay of Angels.

The art lovers will have the chance to see Henri Matisse’s home and visit Musée Matisse (home to 31 paintings and 57 sculptures – almost all the sculptures Matisse ever created).

The nearby Chagall Museum houses a collection of 400 works by Chagall, including 17 of his biblical paintings.

A visit to the Capital of the French Riviera is a must stop in any Europe’s highlights tour. 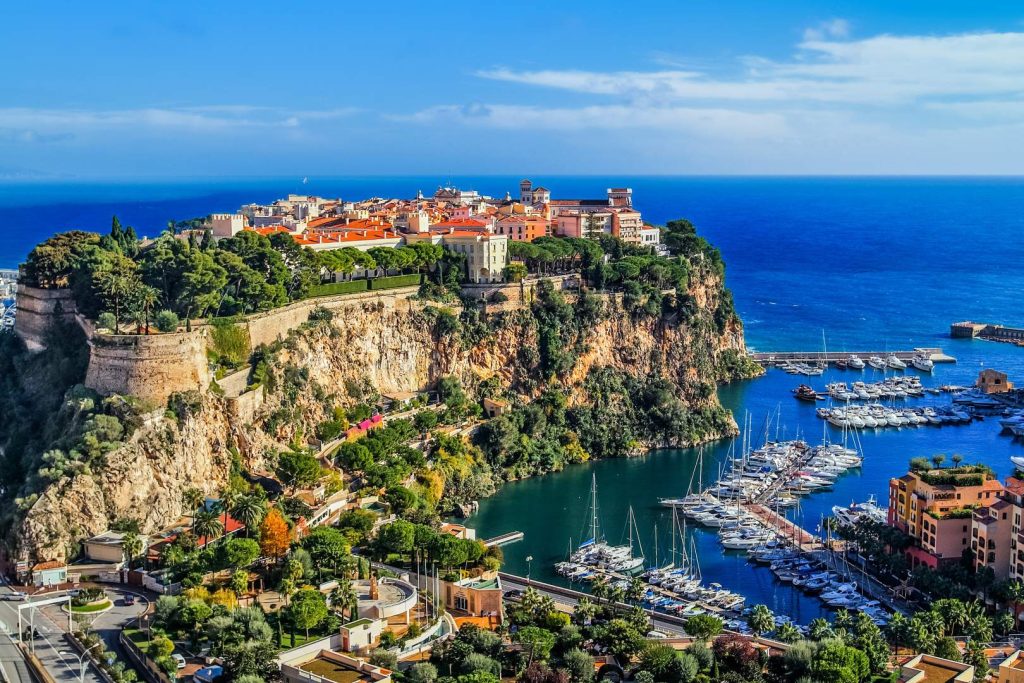 No visit of the French Riviera is complete without a stop in Monaco.

Smaller than New York’s Central Park, it is ideal for a day trip if you are around Nice area.

Monaco has the reputation of being the playground of billionaires – and rightfully so – as almost one in three people living there is a millionaire.

The Principality is also famous for its Monte Carlo casino and the Formula One Grand Prix race held every year on the last weekend of May.
The Monaco F1 GP is the only car race in the world which takes place on city streets.

Visit the Prince’s Palace perched on top of the Hill, watch the changing of the guards and stroll around the old town.

Arguably the most glamorous place on the planet, a visit of the Principality of Monaco and Monte Carlo is a must in any tour itinerary visiting the Côte d’Azur.

The Cinque Terre – the Five Lands 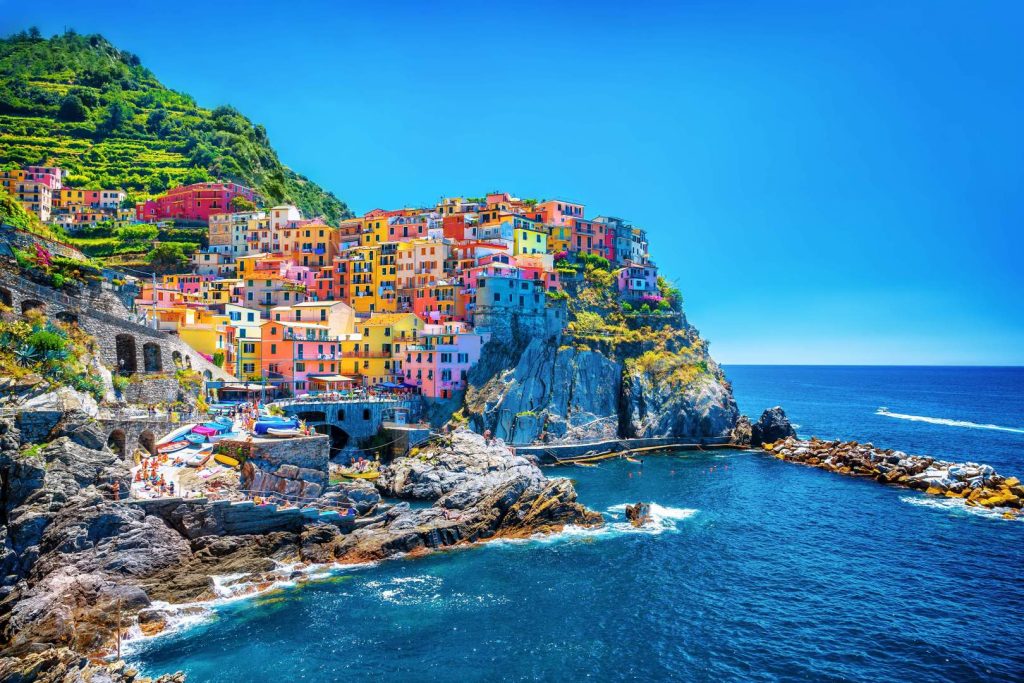 The Cinque Terre is one of those places that’s on everyone’s bucket list.

It’s a magical destination of 5 charming and picturesque fishing villages. The dream of every amateur photographer and instagram enthusiast.

With colorful small houses, many of which perched on cliff sides, stunning Mediterranean sea views and gorgeous hiking trails it is easy to understand why.

The charming 5 villages of Monterosso, Vernazza, Corniglia, Riomaggiore, and Manarola are all connected by train which makes the visit in each one a breeze.
There is also the option to visit the villages (except one) using the local ferry-boat.

There are many restaurants in each village serving local food and – of course – fish.

Besides the natural beauty, the medieval fortresses and gothic churches bear witness to the area’s rich history earning the Cinque Terre the designation of World Heritage Site by UNESCO.

Visiting two or three villages if you are staying nearby makes a perfect day trip.

Florence – the Birthplace of the Renaissance 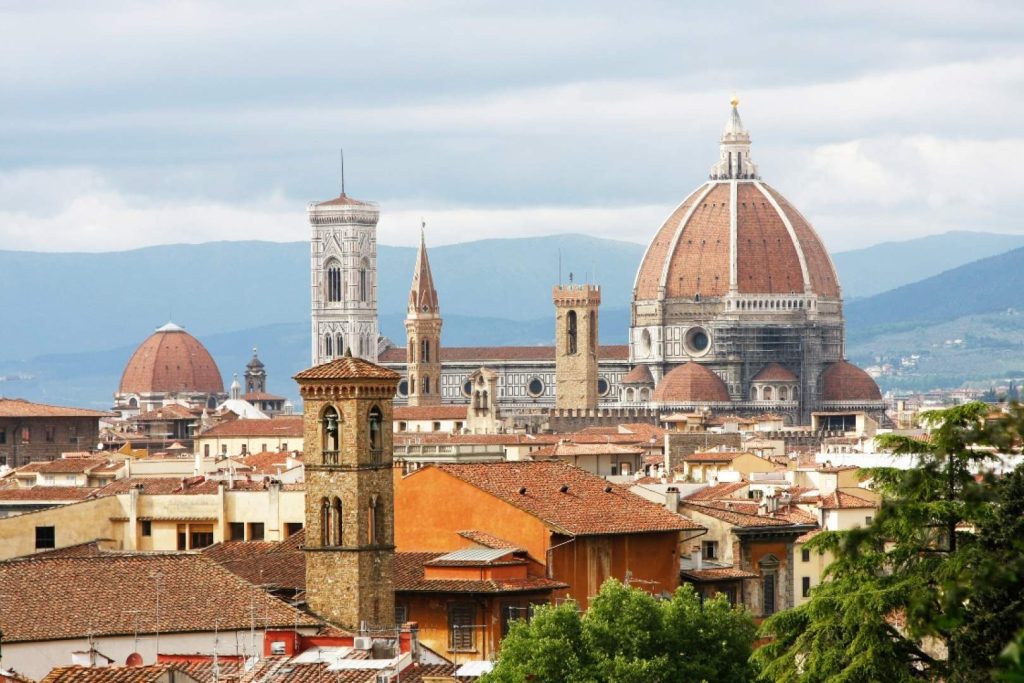 Florence (Firenze in Italian) is considered the birthplace of the Renaissance, the humanistic and artistic movement that broke Europe free from the Dark Ages.

The city is an open-air museum (the entire city is a UNESCO World Heritage Site) and home to one of the most iconic galleries in the world – the Uffizi.

Everywhere you look while walking through the narrow cobble-stone streets, you see medieval palaces, chapels and marble basilicas.
A truly stunning place which makes you feel like you’re time-traveling to the 15th century.

Florence was once an important economic, political and artistic center giving the opportunity to masters like Michelangelo, Galileo and Leonardo Da Vinci to unravel their remarkable talents.

Today Florence is visited for its museums, the boutique shops of famous Italian brands and the great food.

Most people, when they think of Italy, their mind goes to Venice and maybe Rome, but Florence is also among the most charming and interesting cities of the country.

It’s a place to immerse yourself in art, architecture, history and fine dining.

Siena – the Jewel of Tuscany

Yet another Tuscany jewel and UNESCO World Heritage Site is Siena – for some, Italy’s loveliest and one of the best preserved medieval towns.

Anyone who’s been around Tuscany will tell you that Sienna is it’s most beautiful city – there’s a reason for that.

The architectural wonders are everywhere you look in Sienna. Walking in Siena’s old town is a journey back in time.
Vehicles are not allowed in its historic center which makes strolling around a very pleasant experience.

The town’s Cathedral – the Duomo di Siena – is a truly impressive building dating back to the 13th century.

Nearby, the Piazza del Campo is the square where the famous Palio horse race takes place every year and a great place to sit for a coffee or lunch at one of the many restaurants and people-gaze.
The race and square featured in the James Bond movie Quantum of Solace.

Visitors should not miss the chance to try some of the traditional local dishes while in Sienna.

Overall, including a visit to Siena (with overnight or not) is a great addition to a tour programme passing by that area and one that will certainly be most appreciated by tour participants. 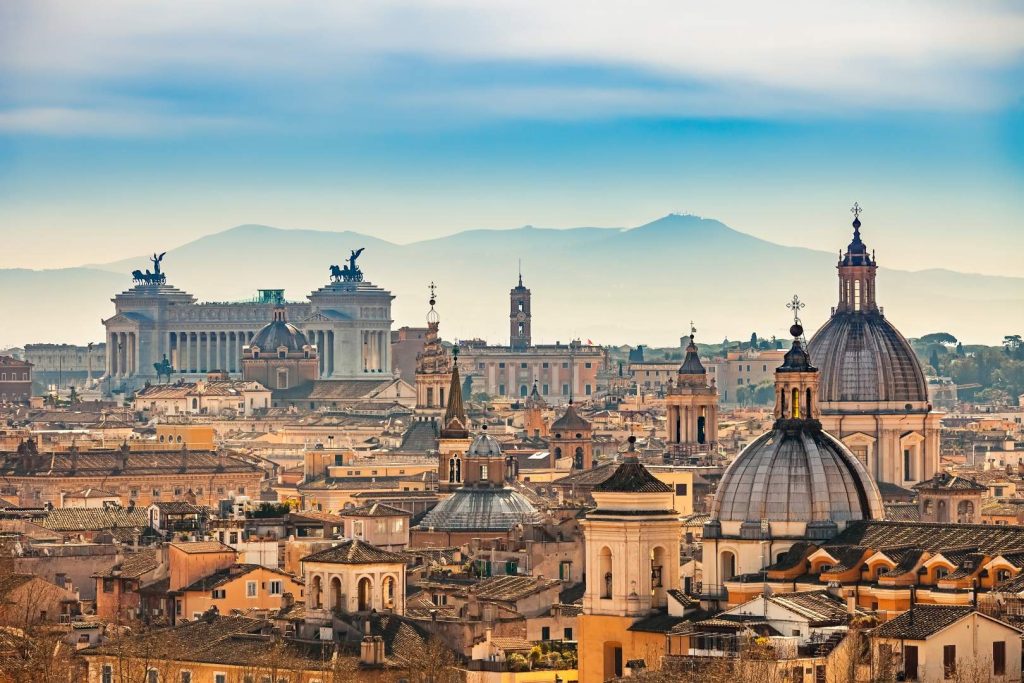 Rome is the third most visited city in Europe attracting visitors from all over the world with its rich history, glorious monuments, exquisite cuisine and vibrant nightlife gaining a place in people’s minds as a dream romantic destination.

Exploring the city on foot (the whole historic center is a UNESCO World Heritage Site) is a remarkable experience; impressive monuments and archeological sites connected through cobble-stone streets, lovely neighborhoods with beautiful fountains, street-side cafes and cozy restaurants creating an indescribable atmosphere one has to experience first hand.

Rome is the center of the Catholic faith with over 900 churches decorated with artworks from masters such as Michelangelo and Raphael attracting millions of pilgrims from every corner of the world.

The Vatican has been the center of the Roman-Catholic faith for centuries.
St. Peter’s Basilica at the heart of Vatican city is one of the most important pilgrimage sites of Christianity; Catholic tradition has it that the basilica is the original burial site of St. Peter the Apostle.
This remarkable monument took 150 years to be completed. Today the Pope presides at a number of liturgies throughout the year which attract audiences from 15 to 80 thousand people.

A visit to Rome fascinates every visitor.
Who does not dream of one day visiting the Colosseum?
We have all seen a movie with scenes of mighty gladiators fighting against wild animals. And indeed, during the Colosseum’s active years (which lasted about 4 centuries) approximately 500 thousand people and 1 million animals died in sports similar to what we see today in the movies.

And who does not wish to throw a coin and make a wish at the famous Fontana di Trevi (The Trevi Fountain)?
Fontana di Trevi is arguably the most famous fountain in the world where visitors gather to fulfill their wishes.
Throw one coin and you will return to Rome one day..
Throw two coins and you will find true love..
Nearly everyone who passes by the Trevi Fountain will throw a coin or two.
As a result, the Fontana di Trevi collects more than 3 thousand euros daily – approximately 1,3 million euros annually (almost 1,5 million USD)!
The money collected though goes to a good cause. Volunteers gather the money which is then donated to charities that help the city’s less fortunate people.

A visit to Rome is a highlight in any European tour programme. The city is so diverse and magical that will mesmerize any kind of traveler.

We, at Travelway, often organize tours containing Rome with great feedback from guests and agents.

Now you know some of the places to include in a hit European tour itinerary.
So, how do you put everything together in a cohesive program that can be flawlessly operated?
That is our job. We are here to share our expertise so that you create the perfect tour itinerary your clients will love.

Contact us today and let’s discuss how we can build that awesome Europe trip that will have your clients coming back for more.